On February 11th was held in Paide community center a discussion about education, where Keila waldorf school’s “Läte” one of the founders, Urmas Keller, shared his experience in founding and maintaining a school. Driven by this talk-circle, I would like to share my impressions and experiences from one waldorf pedagogic methods using kindergarten which was related to our family for two years.

When our child became three, we started to practice him with a kindergarten-life. Problems were sleeping and eating, the child’s dislike of one teacher, diseases and relationships with playmates (in a group of 24 children). The child showed no enthusiasm for going there and I also had no good sense to send child there. We stayed there for one and a half seasons. But I heard about another one where children wanted to go gladly all along and even parents came together each week and discussed about education issues. I became interested and decided to try.

The house had two groups – older and younger, total 20 children. Children groups were compiled partly by their nature – peace-loving in younger group and noisier in older group. Most children did not go to kindergarten every day, but some day a week. Breakfast was eaten at home and at nine o’ clock they came to the kindergarten. Then by candlelight a fairy tale reading took place and after that each day a different creative activity – painting, acting, movement. Playing outdoor activities was followed, as in any other nursery.

One major difference between the regular kindergarten was the only meal of the day which took place after going outdoors. Children helped to cover the table. Nobody was forced to eat the food as well as to sleep. After lunch you just had to be more quiet. Who wanted or became tired, could sleep.
I probably think that we do not have enough active parents currently to build a nursery school or a school using waldorf pedagogics. However, Järvamaa has many schools and kindergartens, where we could at least partly use that method. 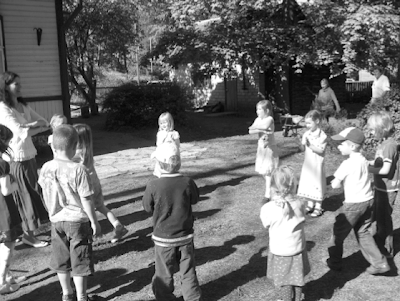